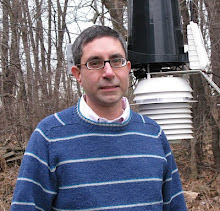 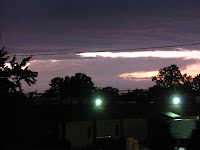 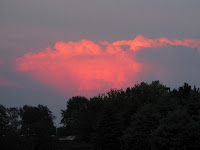 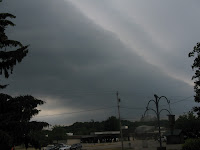 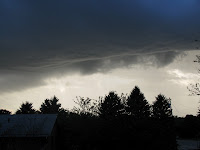 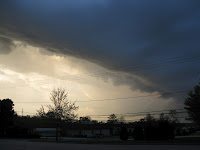 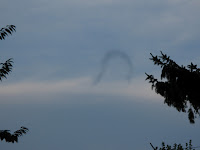 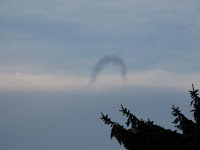 ARTIFACTS OF TURBULENCE
These unusual clouds reveal the turbulent undulations of the air just prior to a thunderstorm. 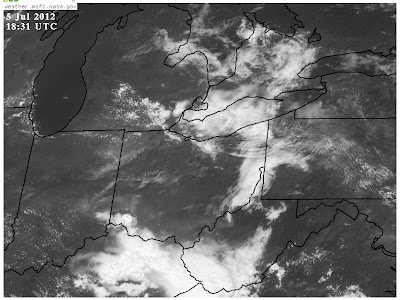 GRAVITY WAVES OVER NE OHIO
Mid level clouds (10,000-20,000) show gravity waves moving outward from the lake shore area. These waves were probably caused by rapid lifting from: (1) a wedge of cool air flowing off the lake, (2) frictional convergence as air piled up against the higher elevations of the lakeshore escarpment, and (3) deep cumulus convection. The passage of these waves coincided with slight oscillations in pressure and strong gusty winds at the surface.

The photo below shows the appearance of the sky in the vicinity of these waves (taken at nearly the same time). These clouds reveal a series of smaller, higher frequency waves embedded in the large scale waves seen on the satellite photo. 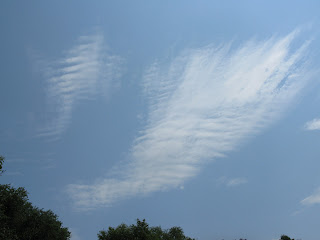 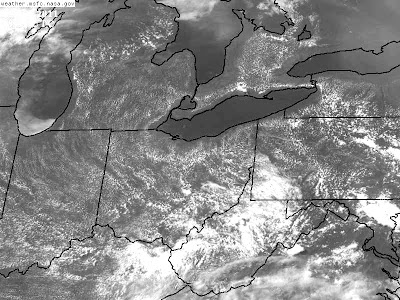 LAKE BREEZE SHADOW
The ring of clear air hugging the shores of the Great Lakes clearly shows the extent of the lake breeze amidst a nearly calm prevailing wind.  When enough moisture is present, the leading edge of the lake breeze (i.e., the lake breeze front) enhances cumulus convection by providing dynamic lift.  This may initiate thunderstorm activity. 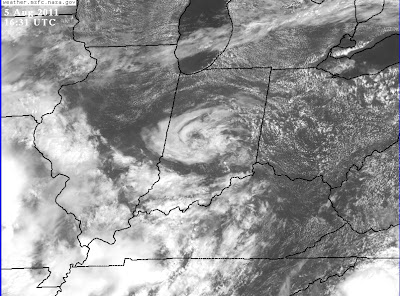 MESOSCALE CONVECTIVE VORTEX
"Land Hurricanes" form from rising hot air.  Like oceanic hurricanes they are warm core low pressure systems and even have an open eye.  Though often associated with the release of latent heat from a decaying thunderstorm complex, this system developed from rising hot air over the Indiana plains combined with a cyclonic flow from a low pressure trough. The lack of significant surface friction probably helped since the circulation is weak.  These vortices are watched carefully for potential thunderstorm formation. 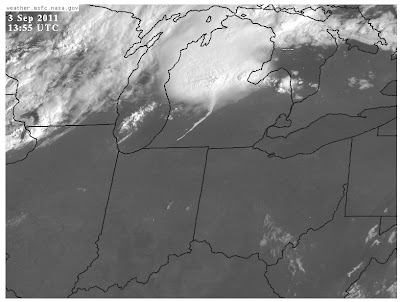 OUTFLOW BOUNDARY
The thin serpentine extension over southern Lower Michigan marks the outflow boundary from a large thunderstorm complex (mesoscale convective system). As the cold gust front (to the west of the boundary) moves along the ground, it lifts the warm moist air creating a line of clouds. Outflow boundaries can move for hundreds of miles and trigger thunderstorm formation by dynamic lifting.  They are often tracked on radar.