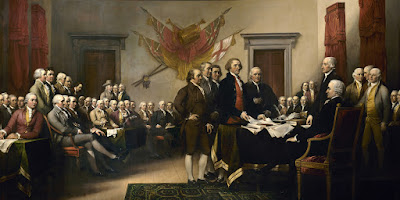 What is the Role of the Federal Government According to the Founders?   Revised & Illustrated!
One of the largest issues that divides the Left and Right sides of the political spectrum is the scope and responsibility of the federal government. Any fair minded comparison between the philosophy of the Founders and that of the present day would be forced to acknowledge that we have drifted quite far from the beliefs and assumptions which underlie the Constitution.

The Constitutional principles promoted here, especially in Part 4, are opposed to the ACLU and other organizations who want to sever all connections and special benefits afforded to religion.  Read it and find out why!

The Polarization of America (PDF) 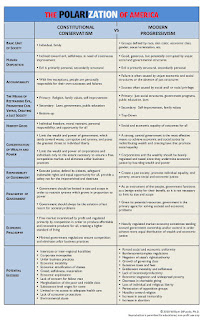 This 11'x17" color chart compares the two philosophies which underlie the political and cultural war which is tearing our country apart.  The columns represent generalizations, of course, which do not take into account some of the nuances and variations found in these systems.Some people will be tempted to pick and choose from both philosophies.  But, the choice between limiting government and enlarging government is rather stark.   And, we are assured by history, that certain consequences will inevitably follow.  We are bidden, therefore, to choose wisely!

My videos on politics and history are under the "My Videos" tab, above.  Also articles posted under "Current Posts."

I also recommend these excellent videos from Prager University:
Was America Founded to Be Secular?
Were the Founders Religious?
Religious Tolerance: Made in America